If it’s not obvious by now, I’m a fan of The Walking Dead.

Actually, I’m pretty much a fan of anything to do with zombies (one notable exception being George A. Romero’s Survival of the Dead. Sorry. I love Romero’s movies but that one was just awful). So, if you want to invite me over for dinner and a movie, you’d better be sure that the movie has something to do with reanimated corpses and flesh eating.

Any fan or even non-fan of the show knows there’s a great deal of ballyhoo over AMC’s unlikely hit chronicling a small band of zombie plague survivors as they fight for survival amid the zombie apocalypse (aka ZA), and that the series has become the highest rated basic cable television show in TV history. And as sure as Trioxin 245 re-animates dead flesh, the show’s popularity has incited what can only be described as “haters”. If you think about it, it’s fairly easy to deride  a TV show that not only is based on the ridiculous premise of society being overrun by flesh eating revenants, but also plays out less like Romero’s Night of the Living Dead and more like an episode of Beverly Hills 90210. However, for reasons that even the most enthusiastic The Walking Dead fan can’t quite explain, millions of television viewers tune in every week to see the high drama (and maybe a zombie kill or two), post-apocalyptic world of former sheriff’s deputy Rick Grimes and his fellow ZA survivors.

Ok, there’s a good reason to think of The Walking Dead as nothing more than soap operatic or as a mere B-movie zombie flick delivered in weekly installments, but those who are philosophically inclined might have noticed amid the 3-way love triangles and Carl Grimes’ incessant annoyingness, something afoot going on – namely, that hidden within the throngs of shambling draugurs, The Walking Dead also gives its fans something philosophical to chew on.

One of those things is the shifting morality of former deputy sheriff Rick Grimes.

When we’re introduced to Rick Grimes (played by Andrew Lincoln), a deputy sheriff from BFE, Georgia, in the series’ debut episode “Days Gone Bye”, Rick is initially presented as an honest, hard-working, small-town sheriff who sternly reminds a fellow (albeit inept) deputy to make sure the safety of his gun is off before getting shot by a fleeing robbery suspect. When we see Rick Grimes we should be thinking this:

Even though we’ve seen Rick on screen for barely five minutes, when his is shot and slips into a coma, we worry about him. We want him to make it through ok. When Rick awakens from his coma (after an unspecified amount of time) to find the world has been overrun by the living dead, we know that he will survive –

Because after all, he is Rick Grimes.

As viewers, we like Rick Grimes. We like Rick because despite the fact that he has no idea what is happening around him, Rick  slips into badass mode and quickly assumes the role of the hero. Rick (barely fully recovered from emerging from a coma, mind you) helps Morgan Jones and his son Duane find a hot shower and load up on guns at the abandoned sheriff’s office. Next, Rick helps a group of survivors escape a department store in Atlanta, and even attempts to return back to the city to rescue a member of the group (the abrasive, sexist, homophobic, and racist Merle Dixon) who is chained to a pipe on the store’s roof and left behind. Although members of the group argue that Merle is not worth saving, Rick feels that it is his duty to return to the city to get Merle. Rick tells the others that no living being deserves to be chained to a roof and left to die. Rick’s absolutist morality dictates that he is obligated to save Merle Dixon, even if it means that his own life is on the line; even if he dies in the attempt, Rick feels that he must fulfill his duty to others despite the consequences.

At this point, Rick’s morality is deontological. That is, Rick Grimes is following the moral principles of Deontological Ethics. Deontological ethics, most notably associated with the German philosopher, Immanuel Kant (1724 – 1804), is the ethical theory that holds that the morality of an action is judged according to one’s adherence to universally binding rules, duties or obligations to oneself and others. For the deontologist, the consequences of an act do not matter as much as the intentions behind an act. Kant wrote:

Do what is right, though the world may perish

Rick’s uniform symbolizes law and order; an absolutist (deontological) morality. And it is clear that Rick, who sports his sheriffs’ uniform well into season 2*, is strongly rooted in a clear sense of right and wrong. He does what is right despite the fact that the world has ended. Rick’s strong and unwavering sense of right and wrong suggests that according to Rick’s Kantian ethics, neglecting his duty to save others is morally wrong – even if the person he‘s saving is a morally reprehensible sexist, racist, homophobe.

Kant states that we act from a good will when we follow the Categorical Imperative. The categorical imperative consists of two primary formulations:

Formulation One: Act only according to that maxim by which you can also will that it would become a universal law.

Formulation Two: Act in such a way that you always treat humanity, whether in your own person or in the person of any other, never simply as a means, but always at the same time as an end.

Rick sees Merle as an end in himself, a person who, despite his flaws, deserves to be treated in a humane way.

We know that Rick Grimes is not only a man who acts in an ethically correct manner, he’s a Good  (capital G) man. Rick believes that it is wrong to leave Merle Dixon chained and abandoned on a rooftop. When Rick tells his wife Lori about the generous acts of Morgan Jones and his son Duane, he explains to her that he is obligated to repay their act of generosity through doing good for others. And when a fellow survivor (Jim) is bitten by a zombie, Rick clearly lays down a deontologically-inspired universal edict when he tells the others who want to kill Jim before he dies and turns into one of the undead, “we do not kill the living!”

It’s worth noting Rick says it while holding a gun to a man’s head.

And even when Rick is re-killing the dead, he does so with a sense of compassion.

Rick Grimes is such a good guy, he apologizes to this zombie before he shoots her in the head.

From all appearances, Rick Grimes is a zombie slaying, Kantian badass but there’s a problem – he doesn’t stay that way.

…it all has something to do with a guy named Shane Walsh.

Shane Walsh (played by Jon Bernthal), Rick’s former partner and best friend, operates by a different set of ethics. Although Rick Grimes and Shane Walsh are partners in upholding the law as sworn sheriff’s deputies, it’s clear that their moral compasses are pointed in different directions. Unlike Rick, whose morality is deeply rooted in deontological obligations and duty, Shane’s morality rests on a different standard of right and wrong: consequences. Shane’s morality does not ask what is my moral obligation to others. But instead Shane’s morality asks, what do I have to do to stay alive?  And more often than not, the answer to Shane’s moral question is whatever it takes, by any means necessary. Shane’s ethics are pragmatic; in that Shane, as pragmatic philosophers suggest, determines what actions are morally correct based on whether an action works.

So, when Shane beats the ever-loving crap out of Ed Peletier, the abusive husband of Carol Peletier (while threatening to beat Ed to death, even though Ed posed no danger to Shane), Shane justifies his actions by believing that beating Ed contributes to group cohesion. When Shane breaks the lock on Hershel’s barn and re-kills all the zombies inside, he is doing it, not to crush Hershel’s hope of finding a zombie cure, but to save the group from danger. When Shane shoots Otis, repeatedly challenges Rick’s authority and leadership abilities, breaks the prisoner Randall’s neck, or even justifies his adulterous relationship with Rick’s wife Lori, Shane reasons, although he might not have done the popular thing (aka right thing to do), that his actions were ultimately justified in that what he did produced positive results.* 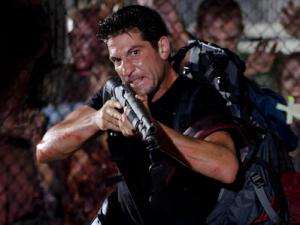 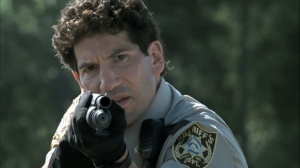 * I suppose it can be argued that Shane Walsh’s ethics are not so much pragmatic as he is an act utilitarian. Either theory works.

Although Rick initially rejects Shane’s necessary evil in an evil world-based morality. Rick’s deontological ethical standpoint does not hold up for long (at least not past season 2). Rick Grimes is forced to kill Shane after Shane plots to kill Rick in an attempt to steal Lori and Carl from his former partner. 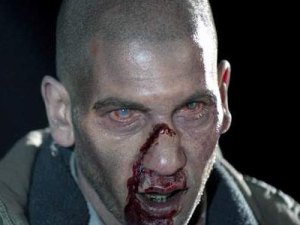 Although by killing Shane, Rick is free to resume his deontological ethical ways, he does not. Instead of sticking to his Kantian guns, Rick assumes Shane’s pragmatic/act utilitarian ethical view. Rick’s new morality, which is pragmatic at best (ambiguous at worst) reflects the new world – A world without distinctions. A world of contradictions, where beings are alive and dead and one must do whatever it takes to survive.

When Rick puts away his badge at Hershel’s farm, it signals that Rick has abandoned his absolutist morality. And by mid-second season, Rick violates his universal declaration that we do not kill the living when he shoots and kills two living men in a bar (by season 3, Rick’s kill count is up to five). When Rick kills Shane, we not only realize that Rick has put aside his own morality, but we realize that the kind of absolutist morality of Immanuel Kant belongs in the old world where absolutes like good and bad, right and wrong, and living and dead exist. In a world filled with the undead, absolutes no longer apply.

By the end of season 2, Rick Grimes is a morally changed man. He is no longer willing to adhere to the rules of the former world. Rick will do whatever it takes and by any means necessary to survive, even if doing so means that he has to (intentionally) hurt others to do so.

As The Walking Dead continues, we will see how the shifting morality of Rick Grimes plays out. Rick’s group of survivors has yet to encounter morally challenged Governor of Woodbury. And Rick’s mental breakdown following the death of his wife most assuredly will affect his moral position in future episodes. Although we’re only halfway through season 3, I have the feeling that in the future, Rick Grimes is going to be solving most of his problems like this: