There. I said it.

Nowadays, if someone even whispers the word “twerking”, she’s the first (and often only) name that comes to mind.

I’m not going to say anything about whether it is a good career move to officially shed one’s child star image by shaking one’s rear end in public places, but what I will say is that I can’t watch more than five minutes of TMZ Live without hearing the words “Miley”, and “Cyrus”, and “twerking”.

I gotta say that as much as I enjoy watching people twerk, I’m not a Miley Cyrus fan.

Luckily, for everything one can grow to dislike as much as one hates , there’s a philosophical something hidden in it somewhere.

They say that all of Miley Cyrus’ twerking antics isn’t about being inappropriate, but is about her want to reclaim the childhood that she lost while she was the star of the Disney series Hannah Montana®. It seems that Miley Cyrus has decided, now that she has the opportunity, to act the manner she wasn’t permitted to act when she was at the age when young people typically behave in a manner that we would call “acting out”.

In Miley Cyrus’ case, her “acting out” includes smoking weed and hanging out with “Molly”. 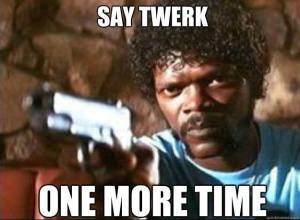 GOTTA THANK EBAUM’S WORLD FOR THIS.

It seems that what’s really at the heart of Miley Cyrus’ behavior is that Miley, like so many of us, is trying to live the good life – the kind of life that makes one happy.

And when you talk about stuff like the good life and happiness, you’re talking philosophy.

Philosophers, from Socrates to Mill, have written about what kind of life constitutes the good life. Socrates wrote (actually, Plato wrote) that the good life is a life of philosophical contemplation. For Aristotle, the good life meant that one lives virtuously. John Stuart Mill says that once we’ve acquired a preference for higher pleasures (instead of lower pleasures) we are well on our way to living not only a good life, but a happy life. Mill writes that lower pleasures (e.g. sexual promiscuity, intemperance, gluttonous consumption of food and twerking) are merely physically satisfying and can’t make us happy. Indulging in mere physical pleasures, Mill writes:

“a beast’s pleasures do not satisfy a human being’s conceptions of happiness. Human beings have faculties more elevated than the animal appetites, and when once made conscious of them, do no regard anything as happiness which does not include their contemplation.”

Mill says that we should want to be a dissatisfied Socrates than a satisfied pig.
Unfortunately, though Socrates tells us that the best life is a life spent in philosophical contemplation, that’s not what society tells us is the good life. Two thousand years ago you could hire a philosopher (or a sophist, if you went that way) to teach you how to think. These days, the media not only tells us what the cultural zeitgeist is, the media tells us what to think about it.

The media tells us not only what’s important, what we should care about, but more importantly, what makes a good life. If you pay attention to the media long enough, you’ll soon be convinced that nothing matters more than being young, rich, famous, and beautiful.

And if you watch TMZ you’ll spend your day wondering what Lindsay Lohan is doing right now.

What can be more essential to living the good life than being famous?

So, when we watch the real-life downward-spiraling life of a Hollywood starlet or watch a fictional character whose life is nothing but a meaningless, black void, as long as they are either rich, famous, of good-looking, we can believe that their lives, despite all appearances, is good. Sure, a guy like Don Draper is a morally bankrupt, miserable, S.O.B., who lies not only to himself but to everyone else, but the fact that Don is moderately well-off and looks swell in a Brooks Brothers suit tells us that we need not worry about his philosophical well-being.

A guy like Don Draper is certain to live a good life and be happy.

I guess it has to do with pulling off a debonair look while smoking a cigarette. 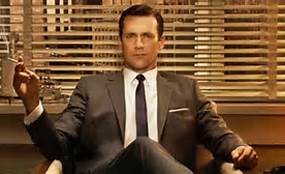 Don’t get me wrong, I’m not necessarily condemning Miley Cyrus, TMZ  or any other celebrity.

Well, maybe I am condemning TMZ.

Any philosopher, well, most, will tell you that the right amount of physical pleasure is a good thing. A proper philosophical soul knows how to satisfy our higher and lower pleasures. And really, when’s the last time you heard of a philosopher drowning in his own vomit?

Our problem is that when we look at the media, they tell us that a good – THE good life is a life devoted to lower pleasures. According to our culture, the life of celebrity is the quickest way to living a lower pleasure-filled life. He might not have known it when he said it, but Andy Warhol hit the nail when he said that everybody will be famous for fifteen minutes.

As long as there’s reality television, everybody’s got a chance of getting famous on TV.

No doubt that being rich and famous is a good gig, but there are far too many examples of how fame and fortune has good reversing effect on people’s lives.

It’s not entirely wrong to appreciate the fact that the contemplative lifestyle requires longevity. Jim Morrison, Jimi Hendrix, Janis Joplin, Kurt Cobain, Gram Parsons, and Amy Winehouse all lived the culturally-approved good life, but they all died before their 28th birthday.
Aristotle lived to be 62.
Leibniz lived to 70.
Sartre died at 76.
Ayn Rand lived to the ripe old age of 77.
Immanuel Kant lived to 80.
Heidegger died at 87.
Bertrand Russell nearly made it to the century mark. He died at age 97.

Listen: A philosopher may be a dissatisfied Socrates, but living past the age of twenty seven might give us enough time to realize that satisfied piggery isn’t the best life to lead. Having fun is alright. We have an inalienable right to be happy (The Declaration of Independence says so), but we also should want to do more than have a good time or feel that knowing intimate details about the Kimye baby is more important than knowing details about the Chelsea Manning case. We should know that twerking or even reclaiming one’s lost childhood isn’t a bad thing, so long as we realize that some of the things we believe will make us happy or make our lives “good” are merely distractions; things that keep us from pursuing the kind of life that will make us truly happy – the philosophical life.

… But then again, it’s hard to argue that partying with Molly won’t make your life good, too.