UNLESS YOU’VE BEEN LIVING under a rock, it would be quite difficult to avoid at least hearing about the new Star Wars flick, Star Wars: Episode VII: The Force Awakens.* The film has already been declared the highest grossing film opening of all time and if those YouTube fan reaction videos are any indication of the film’s uberhype, Star Wars Episode VII may land on the list of top grossing films of all time.

Along with all the other Star Wars films.

SAY WHAT YOU WILL ABOUT TWILIGHT, IT NEVER SPAWNED A TOASTER

And really, what other franchise has spawned awesome cosplay like this?

SERIOUSLY, THIS DUDE’S COSTUME IS THE MOST EXCELLENT COSPLAY I’VE EVER SEEN

Since I’ve made it a habit of paying to attention to pop cultural crap – I mean, stuff other than Star Wars, I’ve also noticed something else going on in the zeitgeist that people who aren’t philosophy geeks might not have noticed:

Although not quite at the level of Star Wars talk, there’s also been a lot of talk about philosophers lately.

But unlike most of the reviews of The Force Awakens, not all of it has been good.

Actually, quite a bit of it has been fairly harsh.

And yes, just in case you were wondering, there is philosophy cosplay. 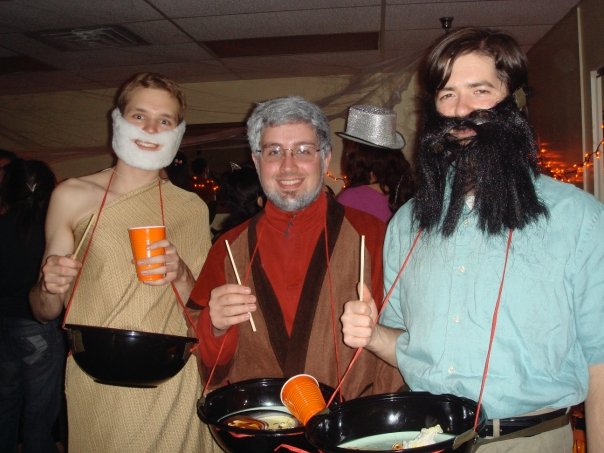 NOT AS AWESOME AS A STORMTROOPER COSTUME, BUT HEY, AT LEAST IT’S HISTORICALLY ACCURATE… KIND OF

Despite the fact that philosophers have been around more than a couple of millennia, we still haven’t convinced folks that we’re not just a bunch of irrelevant navel gazers. We’re not all high-falutin’ intellectual types who sit around reading Plato and over-discussing Wittgenstein.

Not to say that there aren’t any philosophers like that.

In fact, quite a few of us were first turned on to philosophy while watching decidedly un-philosophical things.
Many of us are also really into pop culture.

To be fair, pop culture has always been a part of philosophical thought. After all, philosophers think about reality and the human condition – and our popular culture is a big part of that. Many philosophers are fans of well-known pop culture icons like Woody Allen , and the films of Wes Anderson, movies like Memento and The Matrix, and TV shows like True Detective, Monty Python’s Flying Circus, Lost, and Star Trek.

Believe it or not, a lot of folks who are into philosophy also like seemingly un-philosophical pop culture stuff like Star Wars.

If you ask the average person to name something pop culture and philosophical, you probably won’t hear too many folks throw out the name Star Wars.

TV shows/film franchises like Star Trek or films adapted from the works of Phillip K. Dick may make the top of the list of philosophically-oriented science fiction, but for those who can bear sitting through the prequels, the Star Wars saga is abundant with philosophical themes.
Ok, I know that some sci-fi purists out there don’t classify Star Wars as science fiction.
Science fiction is defined as

Even Star Wars creator George Lucas has described his films as “space opera”.

Science fiction enthusiasts can debate the merits of George Lucas’ space saga’s inclusion (or exclusion) from the hallowed halls of science fiction, but debate over whether Star Wars is science fiction or fantasy space opera doesn’t take away from the fact that the Star Wars saga is very philosophical.

Stop laughing, it is.

PRETTY MUCH SAYS IT ALL

Here’s a handful of philosophical themes you may also have noticed:

Like any battle between good and evil Star Wars is, at its core, a morality play.

So, in preparation for watching The Force Awakens, I binge watched all 13 some-odd hours of the Star Wars saga (It‘s harder to do than it seems). I kept a keen eye out for the moral themes in the films.

Let’s be honest, if you want to analyze anything philosophically, the easiest method of philosophical analysis is to go the ethics route.

Here are a few moral lessons I learned while binge watching the entire Star Wars saga:

*Good not only is a point of view, but also any action may be justified from “a certain point of view”
*Deception is morally permissible
*Withholding important information from someone regarding one’s past (i.e. one’s father’s true identity) or other important info (e.g. the existence of one’s siblings) is in no way a morally incorrect thing to do

*Force choking people into submission is perfectly acceptable
*Cloning individuals and creating a clone army for the sole purpose of using them as cannon fodder is ok
*Mechanical beings (“droids”) that express sentient traits such as human emotions may be discriminated against or destroyed at will
*Making out with one’s siblings is permissible, so long as one doesn’t know he is swapping spit with his twin sister 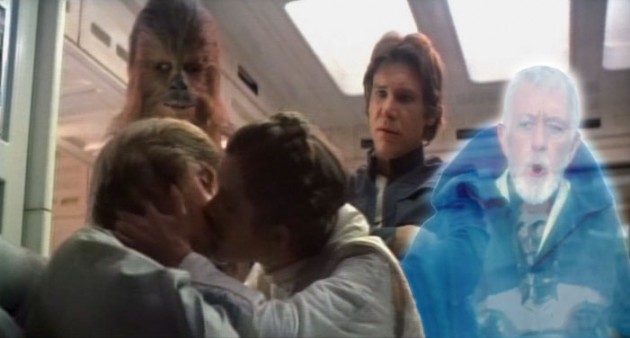 *Destroying a space station and annihilating thousands of innocent lives (aka people just trying to do their job) is morally permissible
*Same goes for destroying the pleasure barge of a single bad guy who was dead before the barge was destroyed
*Shooting womp rats for target practice is not in any way a bad thing to do
*Killing an entire village of men, women, and children is morally justified if said “animals” made you angry 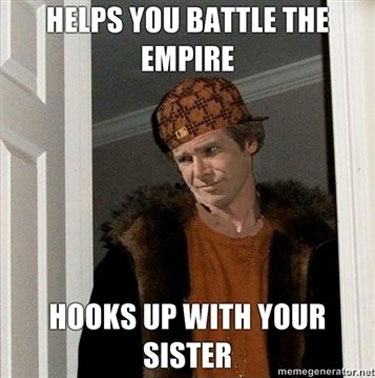 In fact, the only thing I learned was absolutely morally impermissible in the Star Wars universe is this:

For some strange reason, it is wrong to pretend to be a deity to a bunch of diminutive furry forest creatures to prevent them from cooking (and probably eating) your friends.

I guess that’s what makes Star Wars a space opera and not science fiction, eh?