ETHICALLY SPEAKING, I’M PRETTY much all over the place.

I would never admit it to anyone, especially not to my old ethics professor, but my ethics often depends on my mood.

And no, I wouldn’t say I’m an emotivist.

Even an emotivist has consistent principles. 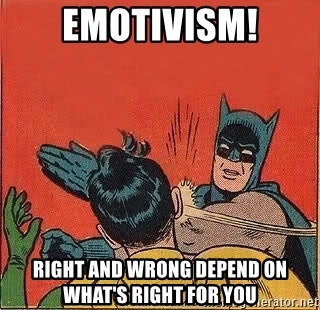 I have more of a whatever happens happens kind of ethics.

Some people say that’s treating ethics like a buffet. You pick and choose only what you want to eat.

…and it doesn’t violate the categorical imperative.

Now, anybody who has ever tried it, knows that adopting a purely Kantian ethics lifestyle is next to impossible. Anyone who wants to keep friends would ever tell an axe murderer that the murderer’s intended victim is hiding in a closet.

Even Rahab lied to protect the Israelites. 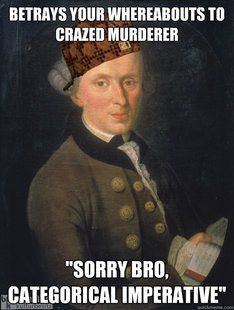 That’s kind of where the egoism comes in.

But there’s a problem with egoism.

To wit: this problem with egoism is this

She’s not the only egoist-slash-objectivist, but she’s certainly the most famous one. And if I have any goal in life, it is to not be associated with being a devotee of Atlas Shrugged or The Fountainhead.

Besides, being an egoist just makes everybody hate you. 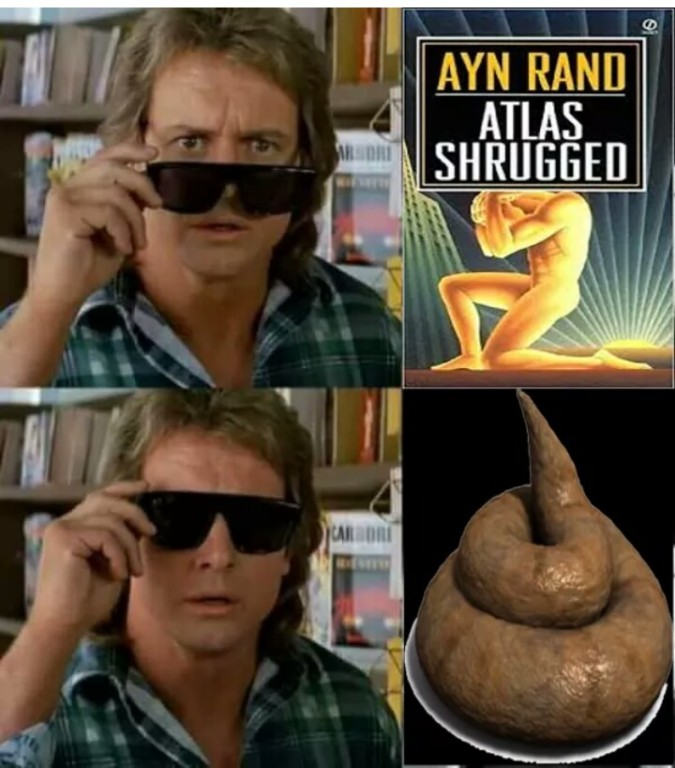 I’ve tried virtue ethics. I’ve done moral relativism. I dabbled in moral nihilism and at various times called myself a practitioner of hedonism, and of classical, act, and rule utilitarianism.

Still…I just can’t get over my fondness for Kantianism.

Don’t get me wrong…I’m not gaga over everything Kant.

There’s not enough bitcoin I could mine to pay me to slog through Kant’s Critique of Pure Reason again.

It’s a book of pure something, but it ain’t reason.

I may be guilty of a philosophical sin, here, but I prefer Kant’s ethics over his metaphysics.

How could one POSSIBLY be a fan of the categorical imperative without also accepting transcendental idealism as the end-all be-all of philosophical metaphysics????

You see, I spent exactly 3.7 years as a practicing utilitarian and all I got for it was a mess of bad decisions motivated by the expectation of good consequences.

I did more than a little bit of bad trying to do the greatest good.

The best-laid plans of mice and men, eh?

Utilitarian ethics is all based on calculating consequences, and I suck at math.

That’s precisely why I like Kantian ethics. It’s so cut and dry. No consequences. No evading my moral responsibilities with a that wasn’t supposed to happen, or it seemed like a good idea at the time.

Ok. I know what you’re going to say: “The Mindless Philosopher, you said, not more than a few semi-paragraphs ago, that, ‘anybody who has ever tried it, knows that adopting a purely Kantian ethics lifestyle is next to impossible.’”

Yes, I did say that.

As counterintuitive as it may seem, the fact that a theory is difficult to practice as a lifestyle doesn’t necessarily mean that the theory isn’t easy to practice on paper – aka, the place where all good philosophical theories work best.

Allow me to give an example.

Because of your all-consuming railroad track fetish, you spend countless, unproductive hours staring at train tracks, waiting for “something” to happen. One day, while observing your favorite pair of diverging rail tracks, you spot on one track, Track A, a group of five people who have been lashed to the rails. On the other track, Track B, your five-year-old child has taken up the family tradition of hanging out on busy railroad tracks for no good reason. A large freight train is racing down the track. Your option is to pull a lever that diverts the train down either Track A) the track with the group of five, or down Track B) the track with your weird kid.
YOU must pull the lever to decide which track (A or B) the freight train takes. Do you save your kid and kill five people, or do you kill your ONE kid and save the five? 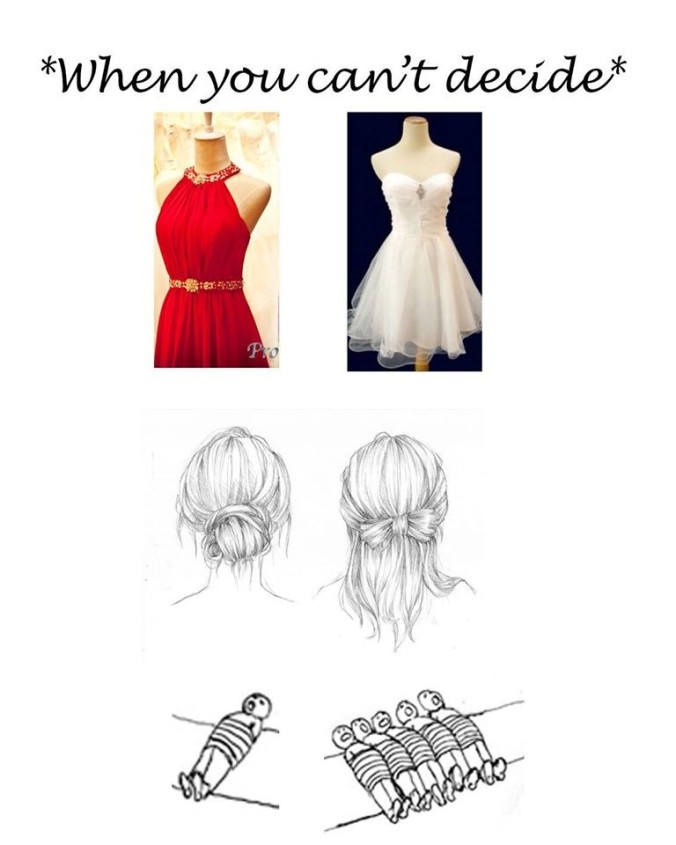 The utilitarian’s decision, to pull the lever to send the train down Track A or Track B, depends on what the utilitarian believes will bring about the best consequences e.g., the greatest good for the greatest number.

Now, can Kantian ethics solve the Trolley Problem? No, not necessarily. But – the problem with utilitarian ethics is, despite our most calculated calculations, we might arrive at the wrong outcome.

Our initial utilitarian instinct when dealing with the Trolley Problem is to say that our utilitarian duty would require us to sacrifice the one life to save the lives of the five.

…because five is more than one.

But wait a minute… utilitarian ethics requires us to calculate the right course of action based on expected consequences. Of course, because human knowledge is limited, we can’t know what the consequence of an action will be. Utilitarian ethics is, at best, based on speculation.

There’s no way we can know that your weird five-year-old child (the one we decided to kill to save the five) would grow up to discover the cure for herpes, saving millions from the pain and embarrassment associated with the disease.

There’s no way we can know that one of the five people we saved was a serial killer, who promptly rewarded your kindness by slaughtering you and the other four people you saved.

…along with a few more people.

Fortunately for us, Kant does not require us to speculate consequences.

Kant’s ethics is based entirely on DUTY.

Consequences be damned, Kant says, we do what we do because it is the right thing to do.

It’s the right thing to do because the categorical imperative tells us so. 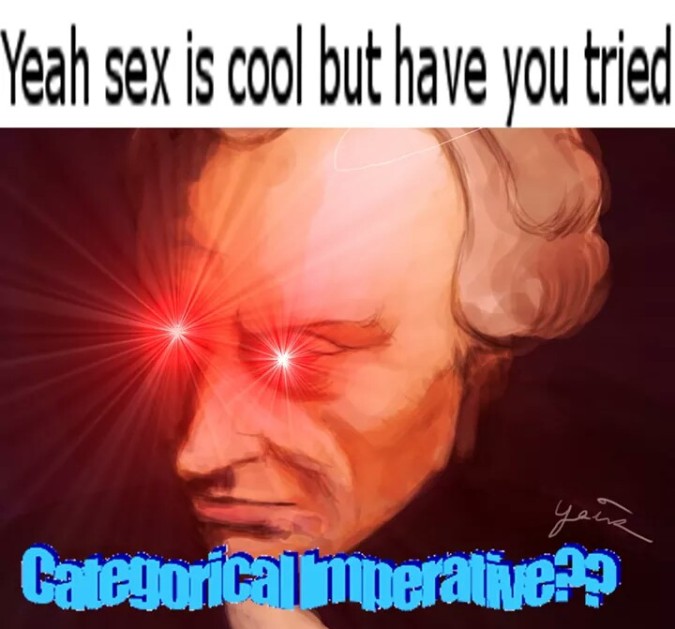 Kant’s Categorical Imperatives are absolute and non-negotiable. They hold for all people, under all circumstances, at all times.

There are four formulations (are there four? I know there’s at least three) of the Categorical Imperative, but the most important (at least the most well-known) is the first formulation:

Act only according to that maxim whereby you can, at the same time, will that it should become a universal law.

There’s also the second formulation of the Categorical Imperative:

Act in such a way that you treat humanity, whether in your own person or in the person of any other, never as merely means to an end, but always at the same time as an end.

That is, don’t use people to get things that benefit only you.

If you just take formulations one and two, it’s virtually impossible to do anything wrong!
And there’s absolutely no need to worry about consequences because you won’t be doing anything bad in the first place!

You won’t cheat on your spouse or on your taxes because we wouldn’t want to make infidelity or cheating on taxes universal law.

You won’t want to use people to your own advantage because people are not here as mere means to our ends.

…and we wouldn’t want to make using people a universal law.

So many bad decisions would be prevented with the simple question “Would I want everyone to do this?”

But…what about that trolley, tho?

Now, if we’re utilitarian, we’d strain a muscle patting ourselves on the back for our morally correct decision making. After all, we saved the lives of five people. The Kantian, on the other hand, does not engage in such muscle training activity. Namely, because the Kantian realizes that

Remember: for Kant, the consequence does not matter. What matters is the principle that got you to what you did. If you flip the switch, are you using the one as a mere means to the ends of the other five? Would we want to say it’s ok for everybody to disregard one life because it makes other people feel good? *

You see, just as Kant would not want us to lie to the axe murderer, because lying is a violation of moral principles, we can’t violate our moral principles just because it is expedient for us to do so. Kant tells us that we must respect the lives of all (rational autonomous) beings, and that we cannot, no matter what beneficial consequences might result from our actions, violate the autonomy of a fellow rational being. 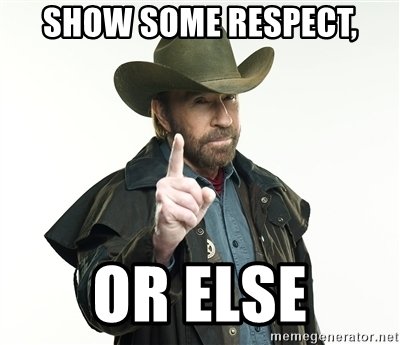 I guess the Kantian would just walk away, or something.

…or ask an egoist to pull the lever.

*I am aware that there is an argument to be made that Kant would pull the lever. I am not making that argument. Play along.