I don’t know if I’m a feminist.

Even though I believe that women are intellectually, emotionally, and often physically equal to men and that women shouldn’t be judged strictly on their perceived aesthetic worth; even though Friedrich Nietzsche wrote, “When a woman has scholarly inclinations there is usually something wrong with her sexuality”, I still hesitate to say that I‘m a feminist.

The philosopher Georg Hegel argued that women’s minds are not equipped to handle the “higher sciences” or philosophy, and wrote, “The difference between man and woman is as between animal and plant.”

I certainly do not agree with that.

I think I agree with the Greek Stoic philosopher Epictetus who said “It takes more than just a good looking body. You’ve got to have the heart and soul to go with it.

Maybe my hesitation has something to do with the fact that when someone says the word feminist, one’s mind immediately conjures up an image like this:

I’d like to think that most intellectually or philosophically inclined people (or at least people who think every once in awhile) are beyond thinking that women are only valuable as long as they look good and don’t speak. With all that higher thinking, you’d think that people who think would appreciate a person for their minds more than for their bodies.

I’d like to think smart people would be sapiosexuals.

Unfortunately, in the real world this is not the case.

This is Ken Jennings. He won 74 consecutive games on Jeopardy! If sapiosexuals ran the world this man would be People magazine’s Sexiest Man Alive.

Definition alert: Urban Dictionary defines sapiosexuality as: To become attracted to or sexually aroused by intelligence and its use.

Even among so-called “enlightened” types there is still the urge to conform to a societal approved standard of beauty. Spend a few hours watching cable news (this is what smart people watch instead of The Bad Girls’ Club) and you’ll see what I’m talking (or rather writing) about. Just look at the women moderating the intellectual debate. Fox News anchors Megyn Kelly, Courtney Friel, and Heather Childers weren’t hired because they look smart or even for their ability to engage in intellectual discourse – they were hired because they’re blond babes – who just happen to deliver your daily dose of things (i.e. news) you’re supposed to think about. Sure, these women can tell us all about the War on Terror, the debt ceiling, transvaginal probes or the latest suicide bombing in Afghanistan, but it’s easier to devote time to serious contemplation when the topics of intellectual discourse comes from someone who is valued purely for her aesthetic worth.

It’s not just that the anchors are basified; the so-called smart guests are also held to the same standard. I can’t say that I’ve ever seen Judith Butler discuss feminism (or any other philosophical topic, for that matter) on a talk show. Not only is there is a lack of unconventionally attractive feminine intellectuals, there’s no lack of name-calling, even among so-called smart people. And attacks on public intellectuals, particularly if the person is female, inevitably devolve to critiques on physical appearance. Feminists and other female intellectuals are often depicted as raging, loud-mouthed, shrewish, man-hating, “feminazis”, and that the only purpose of feminism, as Right-wing pundit Rush Limbaugh says, “was established so as to allow unattractive women easier access to the mainstream of society.” (here’s the link. Check it out for yourself: http://mediamatters.org/video/2005/08/16/the-truth-according-to-limbaugh-feminism-establ/133652) Even on the Left, you know, those folks who claim they’re smarter and more intellectually inclined than their Right-wing counterparts, non-fans of Fox News regular Ann Coulter, although she is not an unattractive woman, often deride Coulter, not only for her opinions, but for having a (perceived) masculine appearance. She’s often accused of being transgendered. Some of Ann’s non-fans call her “Man” Coulter.

I think you can see what all the fuss is about.

There is even a Facebook page called “Ann Coulter’s Adam’s Apple”.

Ok, I know. You’re saying Ann Coulter is not a public intellectual. Sorry to bust your bubble, you filthy liberal. The days of Bertrand Russell appearing on the Mike Douglas Show or Buckminster Fuller chatting it up with Dick Cavett are over. These days, Ms. Coulter is about as public intellectual as you can get – or rather, will get.

And, let’s be honest, Rachel Maddow also has a pretty noticeable Adam’s apple.

Now, really. Is Rachel Maddow’s Adam’s apple that much smaller than Ann Coulter’s?

Of course, a woman’s aesthetic worth goes both ways: if a woman is valuable only for her physical appearance, even if she’s on Fox News, she’s not taken seriously. If she isn’t good looking she isn’t asked to talk at all.

Unless she’s on PBS. That’s where the really smart people go.

This explains why people laughed when Kim Kardashian was depicted reading a quantum physics book in a California tourism ad. 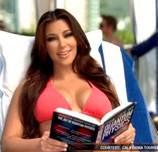 I guess there’s a reason why I watching Fox News got me thinking about looks and stuff… and it’s not because I’m one of those dreadful feminazis Rush Limbaugh enjoys railing about on his radio show. It’s because as a philosopher, I want – and I think we all deserve substance over style. If a woman’s opinion isn’t valued because she does or does not conform to a particular aesthetic standard, regardless of which side of the political aisle a woman sits, we’re doing ourselves an intellectual and (ultimately) a philosophical disservice.

When we don’t hear from those who have knowledge and wisdom to share with us, we don’t learn anything.

That might just be what feminism is all about.

Oh, look! The soapbox I’ve been standing on says “feminist” on the side.

I guess this feminist will step down now.